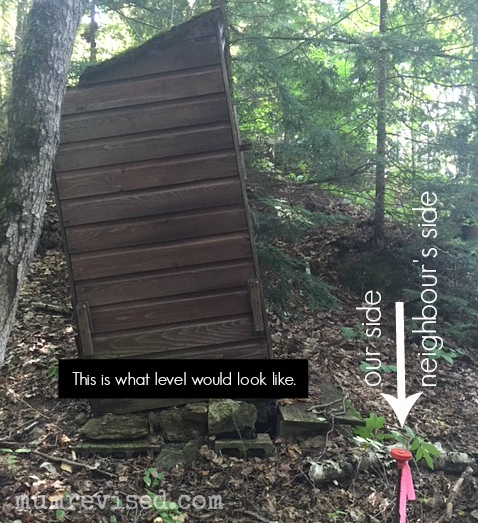 We bought our cottage in 2008. We were spending as much time there as we could but we had some construction going on during the week we were not there to witness. No doubt, it disturbed our neighbour who was there for the whole summer. That’s just to set the stage.

When our neighbour came over to meet us one weekend, they informed us that the dead tree we had felled was, in fact, on their property. We offered them all the wood and an apology. It was leaning right over their outhouse, so we saved them a possible insurance claim and a really crappy mess (or so we thought). We had a good discussion about property lines and we were surprised to find out that what we thought was our property was theirs. No harm. We stayed away.

Fast forward and we were thinking of putting a bunkie on our lot. We contracted a surveyor and discovered that the section of property we had discussed was ours. So was the tree we felled and so was their outhouse. We talked about what to do as it was their only means of ‘exit’. They were in the process of building a new cottage with indoor plumbing and we said they could continue using their little poop house as long as they needed. They promptly got a port-o-potty and we never discussed it again.

Since, we have done nothing with our small smelly home. Until last weekend.

We had company in the cottage and only one toilet. I was feeling less than fabulous but our guest needed to put in her contacts. I let her use the facilities first thinking it would be quick and I would avoid stinking her out (even with the Poo-Pourri, I suspected the worst). I think she was changing her eyeballs out for new ones using a serving spoon and toothpicks because it was taking FOREVER. I was squirming, strategizing, sweating and finally had to find a box of tissues and decide to shit beside the bear in the woods or take refuge in our wooden poo home.

I chose the latter.

This facility had not been maintained in the 7 years we have ‘owned’ it. The roof is patchy, the door flies open allowing the elements inside. I thought of nothing but the sweet release. I opened the door and lifted the seat. Everything seemed in order except the outside was now inside with leaves and debris all over but there were no bears so I sat and simultaneously let go of what I had been holding inside. The other thing that let go was the seat. It proceeded to partway fall into the now rotten wooden support under the weight of my body. That’s right. I fell into a shitter.

As I grabbed the sides of the building for support, the door flew open leaving me in a particularly vulnerable position.

I was thinking that I would really like to get out of there, but my bowels were so happy, it was hard to remove myself from the situation. So there I sat/crouched/leaned and prayed. I laughed and cried and thought of the children. I was ready to meet my crappy end and found the irony in the shituation.

God and my bowels smiled and with a great deal of core strength, I freed myself just in time for me to feel the building shift once again. Good thing too as no one knew I was there because ‘Hey girlfriend, I just have to shit my pants in the outdoor toilet,’ was never uttered.

I have lived to tell the tale and prove, once again, that this shit really just happens to me.

What did you learn from my story? Shit and get off the pot is too easy. Make me laugh. It’s been a crappy week.