Boobs, Bra Sizing and the Conspiracy of the Bra Industry 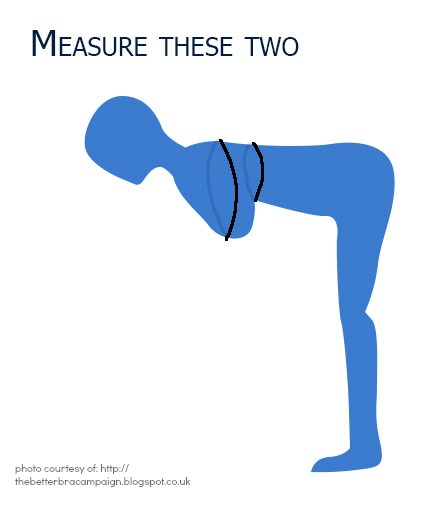 On a recent Girl’s Weekend we had one of our, far-too-numerous-to-mention, talks about boobs. You would think a group of straight, married women would not have a lot to say on this topic. You would be wrong.

It started when the birthday girl showed us this diagram on Pinterest on bra sizing. She said she measured herself and was an F. Sorry, I have to stop here and say it with a straight face. She said she was an F. This particular girl is one of my dearest friends and one of my flattest (sorry babe, but you have to agree). F she said. HA

So we all tried it. Word to the wise: If you have previously breast fed children, you will dangle more and get a much larger cup size than if you have 20-year-old perkies. Sock boobies score particularly well.

We all had to throw away our old bras. Seriously, my bras are rendered deficient. Those danglers be scary!

I recently wrote an article for BluntMums talking about how my bra size has changed over the years (warning: some parts of said article may be offensive to virgin ears/eyes and the breasts pictured are not mine but they are fabulous). I think bra sizes have changed because the bra industry wants to bolster our confidence, especially for women who have breast fed. Some people flatten out but don’t want to feel flat. So, I suspect, the industry has unilaterally made As into Cs or Ds. But Fs? That is just F’n crazy! I wrote that my size had increased by two sizes over the years, but according to ‘the better bra campaign’ people, even that is insufficient.

My F’n friend also relayed a boob story on that fateful weekend. She has a friend who (yes, this is a friend of a friend story, but it is worth it) started as a nurse. On her first shift at the local hospital she was assigned a sponge bath for a women who was not only unable to move, but also had ample boobage. The nurse was dutifully ensuring that all cracks, crevasses and folds were adequately bathed when she heard a gasping slurping sound. Moral of the story… don’t put a boob on someone’s face who can’t move. That is more than a moral folks, that should be a golden rule!

BTW, the lady was fine. She survived to tell the tale of her tit-lolly incident without incident. Was it wrong to have laughed at that story if it had a happy ending? She was clean before she tasted her own boob and don’t you wish, sometimes, you could taste yours too? Being honest. Maybe if I keep growing at this rate I will be sporting my own tit-lollies one day. A girl can dream.