Friday F-Off: Why the World is Screwed (this could be about box opening, but that is not as catchy) 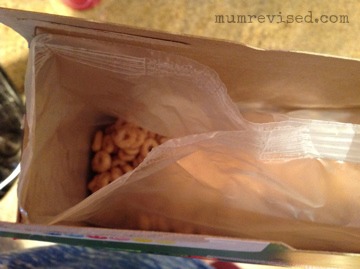 in EG, FFO (Friday F-Off), My Favourites, Shit that happens

Here is another bot-draft. (Internet robots put over 100 of my previously published articles in my drafts folder. This post originally ran on May 10, 2014. I will venture to guess that the 3 people that read this at the time have sufficiently forgotten it so it can run again. Don’t worry robots, your time will come…)

Some Fridays I will take time to tell you about something pissing me off.
Therapy for me. Mild amusement at my expense for you. Win-Win.

As if leaving the cupboard doors open was not enough, we are now onto our opening of boxes problem.

Exhibit A: How to properly open a box. Notice the neat lines and resealable box top? It will be a pleasure to open this in the morning to retrieve the perfect amount of cereal because there will be pour control. Sweet serenity!

Exhibit B: How to improperly open a box. Notice the jagged edges primed for paper cuts? Notice the ‘teeth’ action of the bag itself? You can probably see the bite marks as you pass your hands through the spittle to the delicately absorbing crackers lying beneath.

Why is it that not everyone in my household agrees that Exhibit A is preferable to the point that they make an effort to ensure it happens? Why is everyone is such an fucking rush that they can’t take (and I timed this) 18 seconds – I repeat – 18 seconds to open the box without bodily fluid transfer? I dare to suggest that the jagged box opening took just as much time. There are 7 rips, one section completely gone and those teeth marks…

What the fuck is wrong with the world?! That 18 seconds to open the box correctly saves the time it takes to pick up the f’n Cheerios that leak through the side of the saliva-ridden box opening EVERY morning. Yes, I know this was a Ritz box, but this is not the first time this has happened. It saves everyone the aggregation of my lectures on box opening, demonstrations on box opening and laying down the law that no one in this family is allowed to open a box unless it is me or the dog, because even without opposable thumbs, he could do a better job.

Now that I write that, maybe the dog did open the box… he does benefit from the Cheerio spill over and for some reason no one would fess up to opening the box in question. A dental scan might prove the culprit.

Instead of a Ritz cracker, I will get myself a cookie. I opened that box.