The Ghost of Owners Past 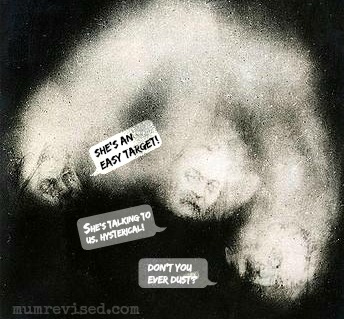 We moved into our new house and felt at home. Well, most of us did. We thought the problem was Scooby. He was anxious and aloof, almost nervous. He began chewing his paws until they were sore. He refused to come near me and I was the one feeding and walking him so it made no sense.

The kids were off to school, Mister to work and it was just the two of us; Scooby and I. Make that three. Strange things started happening. At first, it seemed to be ‘new house’ problems that the previous owner hadn’t divulged. There was a leak in the roof, mice in the kitchen and a furnace that stopped operating. We had a similar experience when we had moved into our first house, so this seemed familiar territory for sure.

But the strange morphed into dangerous and expensive. The leak in the roof was not the roof but, in fact, a window. It took 3 months to diagnose. The eavestroughs fell off the house one day as my father was standing under them. Thankfully they were noisy before they fell. The kids were frolicking in the backyard one day playing “you can’t catch me, you idiot” when Shaggy hip-checked the garden door and the glass shatters sliced open his back.

Stitches, disposing of and hanging a new door later, I was in the garden while the kids frolicked again and the dog hid in the furthest recesses of the backyard away from me. I was digging in the garden (more accurately, a weed heap as the previous owners had black thumbs) when a wasp got mad and stung me on the face. I went into the garden shed through the new door and the wasp and his friends played along and came in with me (as did the kids) and one stung me on the face again. I was slightly alarmed and calmly walked into the house asking the children in my usual quiet voice to follow. Apparently the wasps were my new offspring and followed and stung me on the face for a third time in my own home. I swelled up like an acne sufferer after Halloween.

Mister was is South America that week and I felt wrecked. A glass would fall out of the cupboard every single day, the basement had tiny little annoying flies everywhere, and the last straw was when the locked dishwasher opened behind me and I almost broke my leg falling over it backwards. I would stand in the house that I was so excited about moving into and talk to whoever was the culprit saying things like ‘I have to live here so can’t we just get along?’

I was so distraught I went to the church. I was not catholic at the time (another story) but I went anyway. They had the priest come and bless me to stop my crying (I did that) and he was the priest who dragged around an oxygen tank so it was a big deal. They filled up my water bottle with holy water and gave me instructions on blessing our house/ridding my home of our poltergeist. We stood as a family that Saturday at every door and every window and said the prayer, sprayed it with holy water and the dog was with us the whole time. We even added holy water to his bowl and we all had a sip at the end.

Scooby was back to normal the next morning. He bounded up the stairs with a smile and a wag and he felt better. So did I.

Do you believe in ghosts? Do you talk to dead relatives or is that just me?