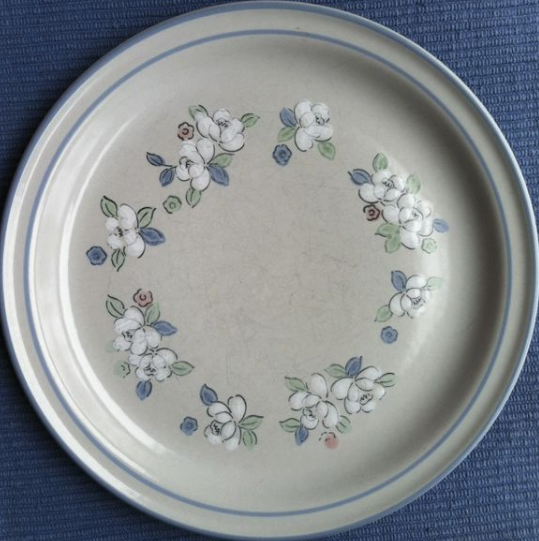 It was decades ago that my grandmother collected coupons from the A&P grocery store. The goal was to amass enough from her weekly grocery purchases to get an entire set of dishes to give to her granddaughter when she was to leave home. I was in middle school and chose the blue stoneware versus the brown because they were closer to my grandmother’s dishware, and I thought grown-ups ate off blue dishes.

She got an entire set for me: Twelve plates, 12 salad plates, 12 bowls, 12 mugs and saucers. It was a sturdy box with each set separated by corrugated cardboard to protect them from movement. Those dishes stayed in my family home for at least thirty years. We moved to Australia and bought a cheap set as our first from Coles because moving Grandma’s dishes might have caused them to break and with grandma now gone, the dishes gained more import. We moved to Toronto three years later and bought something a little more permanent, this time from IKEA. Ironically, they were brown.

Grandma’s dishes were still in Thunder Bay when we moved to Toronto, as were lots of our belongings. We didn’t move books, winter outdoor clothing, camping and fishing gear, photo albums, linens, and those blue dishes. Mister’s moving package included getting those items from Thunder Bay to our apartment in Toronto. The dishes stayed in the closet untouched and remained earmarked for a cottage should we ever own one.

Several years later, we had a home and moved those dishes yet again. I looked at them sitting in our run-down garage when we moved in and thought about bringing them into our new home, but they were not my style. The exterior cardboard looked to have seen better days, but the dishes were intact. They were taped back up and waited there forgotten.

With two children, we shopped for a cottage and found one that was perfect for our family. We cleaned out the garage to find anything we could repurpose in our new lake property. We found tables and chairs that we had saved for just such a day. There were pots and pans and casseroles. We found old towels and linens that were good enough to get us moved in. And then we rediscovered the dishes tucked into the back corner of the garage that never fit our car. I opened the box and realized they were still not my style, even though our cottage style was garage sale chic. There was no special occasion left. Neither of our children would want them and I no longer wanted them. We were clearing out baby items, unwanted once-valued books and clothing. It was time to move on.

But throwing out those dishes was not something I wanted to do. Nor did I want to donate them into a box in the grocery store parking lot. A friend suggested a women’s shelter. I found one in desperate need and packed up the box and all the baby paraphernalia into our minivan.

I pulled up to the door of the unmarked shelter and pressed the button, signifying I was there and I was safe. The shelter manager came out to help with the load and was incredibly thankful. They had a family come in the dead of night the day before, and they had fled with nothing: no change table, bouncy chair, car seat, warm boots, and no dishes. I was holding the Exersaucer when a woman, obviously very pregnant, came around the corner from a stroll with her two toddlers flanking her. She looked worn, tired, and beaten. Her skin was dark, but the swelling was evident even if the bruising wasn’t. She approached the shelter and worked her way up the stairs we were using as our moving entrance. The manager talked to the woman in hushed tones and then said to me, “Would you like to meet the family that is going to be using your donation?” “Of course!”

It was her. The pregnant woman standing right beside me on the stairs was going to be using grandma’s dishes. We looked at each other and connected without words as mothers. She hugged me close, and we cried while the manager brought her toddlers into the building.

It was at that moment I knew why Grandma had saved those dishes. They weren’t for me; she had saved them for this woman. My job was to find her.