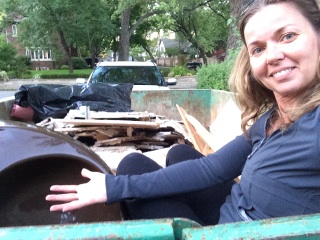 I am sitting in my dumpster on a brown toilet. Life is good.

You see it is good because:

a. We owned a brown toilet that is now in a dumpster, and

b. Once they destroy our house, they are planning to put it back together all pretty like.

I get a bit giddy (hee hee) seeing a dumpster in my driveway, unless it is filled with my clothes and shoes, I wouldn’t be giddy then.

We have lived through two renovations. One basement and one kitchen. Both on our old house. This is the first bin (hee hee) at this house. We have lived here for four years and have lived with a brown toilet, sink and tub for that long. Thank you, therapy has helped but donations are not necessary. If it weren’t for the sewer flies, I may have been living with it for longer.

The renovation we did on our previous basement was our cherry popper. We didn’t know what to expect or how it would go but we were really pumped about it. I remember coming home one day to a note. “We poured some concrete in a patch near the laundry room door. Please avoid it”. Did that say laundry? Must. Do. Laundry. This is how that went.

The second renovation was the kitchen. While that one was being done, we had several issues:

We had small kids and the backyard had a swing, not to mention the BBQ which was better than nuking everything. All was well until… (duh duh duh) the raccoons discovered that they had a perfect little private lavatory. They loved it right there under those trees in the confines of the bin on one side, gate on the second side and the solid fence on the final side. Practically a private latrine! So every time we passed the kitchen land mines to get to the door for outside time, we had to pass racoon land mines. I kept throwing the shit piles in the bin thinking it would be gone in the first week. NO! Remember the windows that Mister did wrong?

So the bin full of clean shit from the house and not-so-clean shit from the racoons sat in our driveway for 3 months. You heard me correctly… 3 months worth of poop sitting in the direct sunlight in the path of getting to our food and entertainment.

We tried putting cayenne pepper down near the bin. HA

We tried fox urine (yes you too can have fox urine in your house. Just follow this link for free delivery). HA

We tried spraying the offenders with the hose. HA

We just had to live with their poop.

Guess what? After the bin was removed, the racoons still liked their new outhouse so the piles were neatly displayed right outside our new kitchen window – every morning. They too appreciated our decision to renovate.

OK, so maybe they are laughing again since they are having a zombie party in our attic. I really don’t like racoons! This will not be the last you hear of them, I am sure.