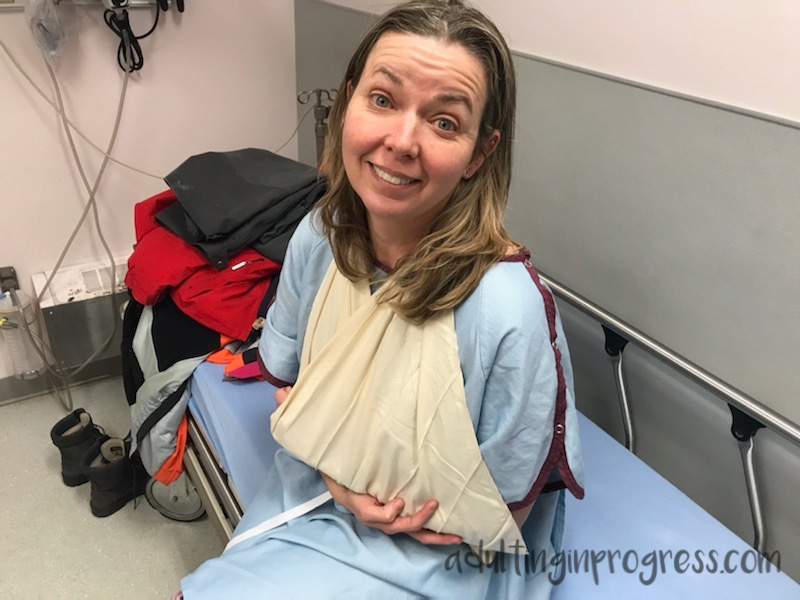 If you missed the first installment of this adventure, go here to read it first. Or don’t. You be you.

“Are you ok?” Came the deep voice of a competent skier who had made it down that same hill that bested me with the ease of self-indulgence. I fought the urge to say, “Sure, I just wanted to draw attention to myself under the chairlift and was super pumped about my morning hill nap, so leave me alone.” I did not say that. “I hurt my shoulder,” was the weak reply I managed. “Can you ski down?” I know this is a question they have to ask, but I found it borderline assholey. “No, I cannot ski down,” I said with a bit of snark to let them know I wouldn’t tolerate stupid even in my state of stupid.

My immediate concern was that Mister had no idea I was dying, and I needed a witness to my last moments on earth. I wanted to tell him to tell the kids I love them and remind him to stop putting bowls in the top rack of the dishwasher if he is ever to find love again.

Another red coat, covered in snow, came up behind the first Ski Patrol, and I wondered if the same snow zombie had attacked him when he cleared it up for me. “I got caught on the same snow snake you did.” That explains it! If this guy, who works on this hill, knew about the mysterious happenings, why was the place not shut down? I know I signed a waiver I didn’t read, but I’m pretty sure if it had the word snow snake in it, I would have been triggered enough to walk away. Ain’t nobody got time to navigate snakes when you are choosing to hurl yourself from heights that would scare you to run on level ground.

With my skis in the tell-tale cross 100 metres uphill and the red-coats on their walkies, I waited. I pulled out my phone to call my husband but, and this might be news for non-skiers, when your phone gets cold it tells you it is too hot and it shuts down. The fact that phones die on that hill should be a warning that skiing is bad for your health. When your lifeline goes down, it’s even hard to say your goodbyes. My phone was fine, but my husband’s wasn’t, and my calls went to voice mail. Likely he had already moved on and was talking up some hotty on the chairlift as I lie there. Wait until she sees him load a dishwasher.

There was a lot of talking over the top of me, and I began to see the words floating in the air like cartoon bubbles. “Death rattle,” “So young,” “Not another one.” It was a tough time.

“Any chance you can contact the lifties and ask if my husband is hanging around there?” He has to be patient at the bottom of the hill often. I’m slower than a turtle in a coma. Also, I have a Good Samaritan gene. If anyone falls, I stop to help. If a kid is crying, I offer to help. No, it is not procrastinating. I swear*. It is only because I am a kind and caring person who knows we are all on this escarpment of evil together. It might look pristine and ‘naturey’ with its ice-laden branches and billowy snow-covered woodlands, but that is absurd. It is the equivalent of a fluffy bunny that cocks her head to the side to beckon closer and just as you reach to scratch her head; she severs your arm at the wrist.

Meanwhile, the Ski Patrol had retrieved their toboggan and placed it downhill from me. It looked comfortable. And by comfortable, I mean it looked like a morgue tray. I needed to get myself on the slab for easy transport down the hill. At this point, I assumed I had dislocated my shoulder. It made sense. My arm up the hill, my body, transversing down the slope, meant all my muscles ached like I had been trying and failing to do pull up with one arm.

I scootched my butt closer to the sled. And then in a move I can only describe as ungainly, I rolled onto my right side, and lifted my left leg like a ballerina wearing lead ankle weights onto the flat, wooden surface. I then used my right ski boot to swim my right hip closer to the sled, completely ignoring that I had a usable right arm. When one went down, the other arm committed to solidarity and chose to be useless too. Picture a breakdancer doing the worm on their side but with less fluidity. Finally close enough for hoisting, my right arm decided to get into the game. I dead weighted it to the opposite side of the sled. In doing so, I pushed the sled further downhill, and I had to sidewind my way towards my goal again. With three people assisting me, I finally got my ass on the hard surface of the rescue toboggan. I began an internal celebration that looked a lot like crying on the outer side when one of the Patrol mentioned I had to move down.

You have got to be kidding! I am in my final resting place, and you are asking the dead to reposition themselves? This was all implied, of course, and they saw in my eyes the non-compliance of salmon at a sushi restaurant. Instead of me moving myself, they manhandled me into place by grabbing my tush and pushing me towards my feet.

“I usually ask a guy to buy me a drink before he gets to touch me like that,” I managed to squeak out in response to the humiliation. Three people then strapped me down like a soft-sided duffle bag on the top of the family station wagon. But they didn’t tighten it enough not to lose their precious cargo. I think it was so they didn’t injure me further, or maybe I was complaining, and they wanted to get it over with, I can’t recall. Then came the body bag zipped from my feet. They left my face out, but I knew that was for show. It was over. Well, I’d had a good run.

Just then, I saw my husband pass overhead on the chairlift. I waved to him through my face opening. I used all my fingers, I swear.

The ride down was faster than I would have gone if I had been on my own. While in motion, I was slipping from side to side on the hard surface as the Ski Patrol maneuvered me towards safety. Each slip left brought stabs of pain in my shoulder and arm and an audible grunt of disapproval from their baggage. Overall, I’d give the ride a 2/10. The two is for the thrill, but the -8 is for the pain. I don’t remember pain on any roller coaster I’ve ever managed to be talked into riding.

The trees whipped by, and I tried my yoga breathing to calm my rapid heart rate. At one point, I heard my husband speaking but couldn’t hear his words, but I’m sure it was something like, “How long does she have?” and “Do I have to go with her because I have someone waiting for me?”

I decided to close my eyes because nothing is freakier than a dead person with their eyes open. I am always thinking of others.

We made it to the bottom of the hill, I put on a cotton sling, my husband drove me to emergency, and the coffee from their cafeteria wasn’t as bad as you’d expect. They drugged me, X-rayed me, and gave me the news that I had broken a piece off my shoulder. Technically, the ball part of the humorous. So, my funny broke.

I will be in a sling for at least six weeks. Meaning, I will survive another day to complain about those fucking bowls on the top rack. Oh, the humanity!

* You’re right. It is procrastinating, but my family doesn’t know this, so keep it to yourself.