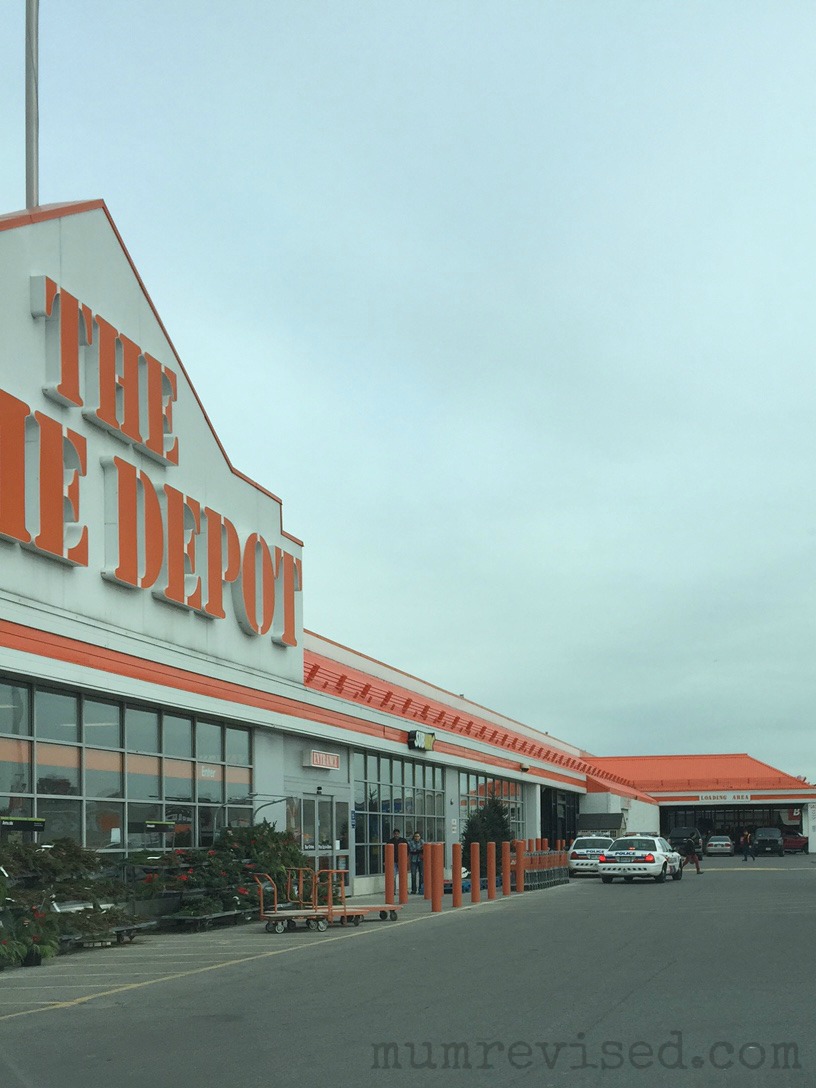 I am just a girl, standing in front of The Home Depot, waiting to be needed.

Just when I thought the holidays couldn’t be more festive, I stood in line at the Home Depot returns counter. I’m crazy like that.

I was minding my own business waiting to return a robe hook. The guy currently being served was very fidgety. I assumed is was because there appeared to be many staff just ignoring us when they are usually very attentive (that is not facetious, I actually think the returns at Home Depot are well done). Next to fidgety was a contractor who was waiting on someone as well. Contractor told Fidgety that he should just go back in the store and grab the ticket to save everyone time. Fidgety must have decided Contractor was right.

This is when I noticed a guy standing close enough to me that I observed he had great skin. It pisses me off when great skin is wasted on men who could, in general, care less about their skin. They probably pay less for their great skin than the national debt of Namibia (as I do for my mediocre skin). Mister has great skin. An aesthetician once told him that he had the best skin for a man she had ever seen. He loves to talk about his pores now and I love to talk about how, it may be possible, that he was the only man who she had ever given a facial to. Fair is fair. But I digress. Back to The Home Depot.

Fidgety appeared to be going back into the store leaving a bag of stuff at the till when Skin Guy grabbed him by the wrist and whispered to Fidgety ‘don’t resist, you are under arrest’. Skin Guy was close enough to me that I heard the exchange, but not close enough to Fidgety for him to hear because he looked like ‘WTF is this guy man-handling me for?’. Skin Guy repeated and then Fidgety got it. Fidgety attempted to run but Skin Guy forced Fidgety’s hands behind his back and brought him down in a single move face-first to the ground. I had to jump back and heard the thump of skull on concrete as Skin Guy was now screaming ‘don’t resist, don’t resist, don’t resist’.

I moved out of the way to beside Contractor. Contractor decided to chime in.

Contractor: What the fuck man? I’m calling the cops.

In all fairness, I was probably the only person to hear what was happening and it just appeared to be a fight without the context.

Me to Contractor: He’s under arrest. Maybe you should stay back.

Contractor: Fuck man. Go easy. You are a fucking mall cop man. With all the cop stuff happening, you need to calm the fuck down man. (Contractor getting political. Interesting. Oh, then he decided to film the exchange. He is also prudent.)

Fidgety: What the fuck man (same school as Contractor I’m guessing)? I didn’t do anything.

MC: Stop resisting. You are under arrest.

Contractor: You don’t have to fucking hurt the guy man. You’re a fucking mall cop.

In my humble opinion, mall cops probably prefer not to be called ‘fucking mall cops’ when they are trying to apprehend someone. They know people call them that when they are walking around, but they probably expect some respect when they catch someone. In case you were curious, I looked to see if MC had a pixie stick in his breast pocket. He didn’t, so I can only assume he had consumed it before he took Fidgety down. Shout out to Paul Blart…

The Home Depot employees asked if they needed to call 911. Was that a rhetorical question? They also got on the contractor band-wagon and told the MC to cut the guy some slack even though he was still trying to bolt.

Finally MC said: You are under arrest for fraud. Get your hands out of your pockets and stop resisting.

Fidgety stopped fidgeting. Both were kneeling on the floor. Contractor was still filming. There were 6 Home Depot employees watching the chaos unfold. I still owned a robe hook I no longer needed.

The police arrived. I was able to return the hook and get the item I needed before anyone took my statement and I came back to see if they needed to talk to me. The police and their perp (I love that word) were leaving so I am out of this one. So glad, because I am still waiting to be called into court for the time that I intercepted a similar take down with an off-duty cop and a maniacal woman who had just done a hit and run. I can’t have two of those trials waiting to happen unless they can promise me parking at the court house. And coffee. Coffee would be good.