My Doctor Found a Lump 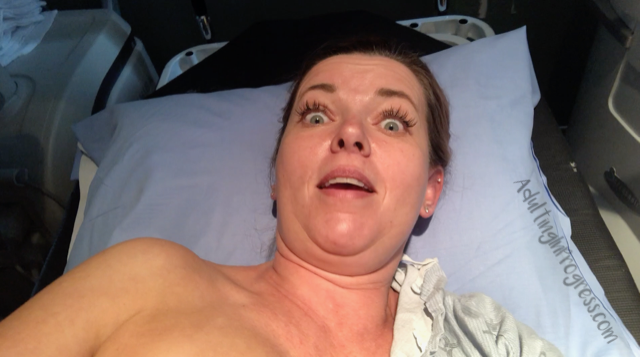 I went to my routine checkup, and my doctor includes a breast exam each time. I try to do my own checkups, but nothing ever seems to change, yet it always seems different. I wouldn’t know when to pull the alarm unless it was undeniable and then would it be too late?

Back on the paper, he finished his exam, and he’s a talker, so he talked right through it without changing his tone or pausing in any way. I got dressed assuming there was nothing of concern while I waited for the bloodwork requisitions. Certainly, I would have heard impending bad news in his voice. He is a bit of a hypochondriac. I’ve been dying of blood poisoning, endometrial hyperplasia (I had to look that up–thickening of the uterine wall lining), and a sleep disorder in his office. He over vectors and I know it. It means he expedites any referrals, which is a nice byproduct.

Not today. The doctor was stoic when he reentered and showed me a picture of his dog, Buddy. “Buddy is a therapy dog. Whenever I have bad news to tell a patient, I show Buddy, and it eases the blow.” I still hadn’t clued in that he was talking about me because I was admiring cute little Buddy–that dog worked.

“I found a lump in your right breast at about 10 o’clock. It is not large, but I am going to send you for a biopsy.”

There are about a thousand questions I could have and should have asked, but I thought of none but, “How old is Buddy.” Seriously, that dog has magical powers.

I’m going to spoiler alert you… I’m fine, and Buddy is 5.

I went to Women’s College Hospital and was expedited, as usual, which was both reassuring and terrifying. My appointment was a long one, and Mister accompanied me, which was nice, but he was more nervous than I was. Once we got to the patients-only section, he was forced to wait in the worry room.

The nurse found the lump, the doctor found it, the technician found it, and the radiologist found it. I did not. Every time they would ask me where it was, I couldn’t find the lump. It was 2cm in diameter, and it was nowhere to be found. Yes, the lump was there. Yes, they were concerned enough that they were going to perform the biopsy that day. No, don’t panic. Where’s Buddy when you need him?

I was relatively calm on the day. I had two weeks waiting for my appointment when a lot of anxiety crept into my life. The same two weeks, I was headed to the gun range with Mister for my 50/50* project and had beekeeping, and a food fight to plan. So, I was preoccupied except when I wasn’t.

Back to the paper… the radiologist came in to perform the biopsy. I asked about pain, and she said it would be just a pinch. Here’s a tip for medical practitioners–if it is going to hurt say so. The biopsy was a toe-curling pain, and when she finished the first of three samples, I told her, in case she could do something about it. Her response was, “I know it is painful, but it will be over shortly.”

IF YOU KNEW IT WAS PAINFUL THEN TELL ME, SO I CAN SET MY EXPECTATIONS!

Sorry to scream, but that is what I wanted to do on that table. Scream at the doctor holding the super pointy sharp grabby thing and aiming it at my body. If she had told me it was going to hurt like a mofo, I would have probably hugged her afterwards and said, “That wasn’t so bad.”

There was no hug.

The results came back normal, and I am on a six-month rotation for checkups. I’ve had the first one, and there is still no cause for concern.

Moral of the story, my doctor told me not even to bother checking my breasts because I am untrustworthy. But that is not advisable for everyone else. Unless your doctor tells you otherwise, be prudent. And know that Buddy is there for you.

This is not the real Buddy (due to dog-patient confidentiality), but this looks just like him. Feeling better?

The other of my 30 Day Writing Challenge friends you should check out is Melissa. She writes at An Unfit Parent. She is irreverent, bossy, and swears like she means it–just how I like my friends. I have also shared a platform with Melissa on BluntMoms. She’s a great writer and makes a killer breakfast bake.