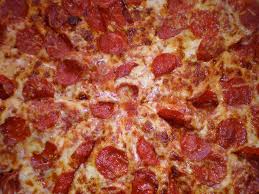 I am a pizza mum. I organize the pizza for the school lunches, collect and count money, get the volunteers etc. I do this for Minime’s school because when our kids both moved schools it was the job up for grabs. I used to do it at the previous school they were at. I had designed it to be a one-woman-job feeding 754 kids simultaneously. The parent volunteers were in the classrooms far from my domain and I only had Grade 8 kids to deal with (they were much easier!).

They don’t know they are called that because I just made it up. Here’s why.

I walked into the middle school just as the fabulous woman who is in charge was taking delivery of a LOT of pizza. I stayed to stack, hold doors and, generally, help. When we were done taking delivery, lunch had already started. I walked into the pizza chaos and I heard a mother say, to no one in particular, I wish I had a different marker because this one is dying. I found her several markers, she chose one happily and continued with her duties.

Here’s where the Posse comes in. So this school sets up two areas for pizza: one for cheese, one for, you guessed it, pepperoni. I was standing, with my marker, in front of the pepperoni station. This is how the convo went down:

Posse Boss 1: I think we have it under control.

Me (to mother on the other end of the table): Anything I can do to help?

Posse Boss 2: I think we have it under control.

Posse Boss 2 (in the same breath, turning to the woman standing next to me with the stupid smile – was that bitchy?): Can you go get a marker and help me cross off these orders?

WTF? I am standing there with a visible, perfectly good marker and bitch face has to go and get one. OK, that one was bitchy.

I proceeded down the hall to the cheese tables. They were all ‘Oh hi! Can you take our recycling?’ And I was all like, ‘OMG Yes!’ Since the Posse was being all high school I thought I would start talking high school too.

When there was a lull in the action I told my cheesy friends about the Pepperoni Posse and they were all like ‘They did that to us too!’. Who do you have to blow to get on the Pepperoni station? So my cheesy friends and I decided we are going to go all concert on those bitches and park our keisters under that pepperoni sign 45 minutes before expected arrival time next month. We won’t smoke pot, but we will have our lighters ready. Watch out Pepperoni Posse, there is a new sheriff in town and me likes me some salty pork!