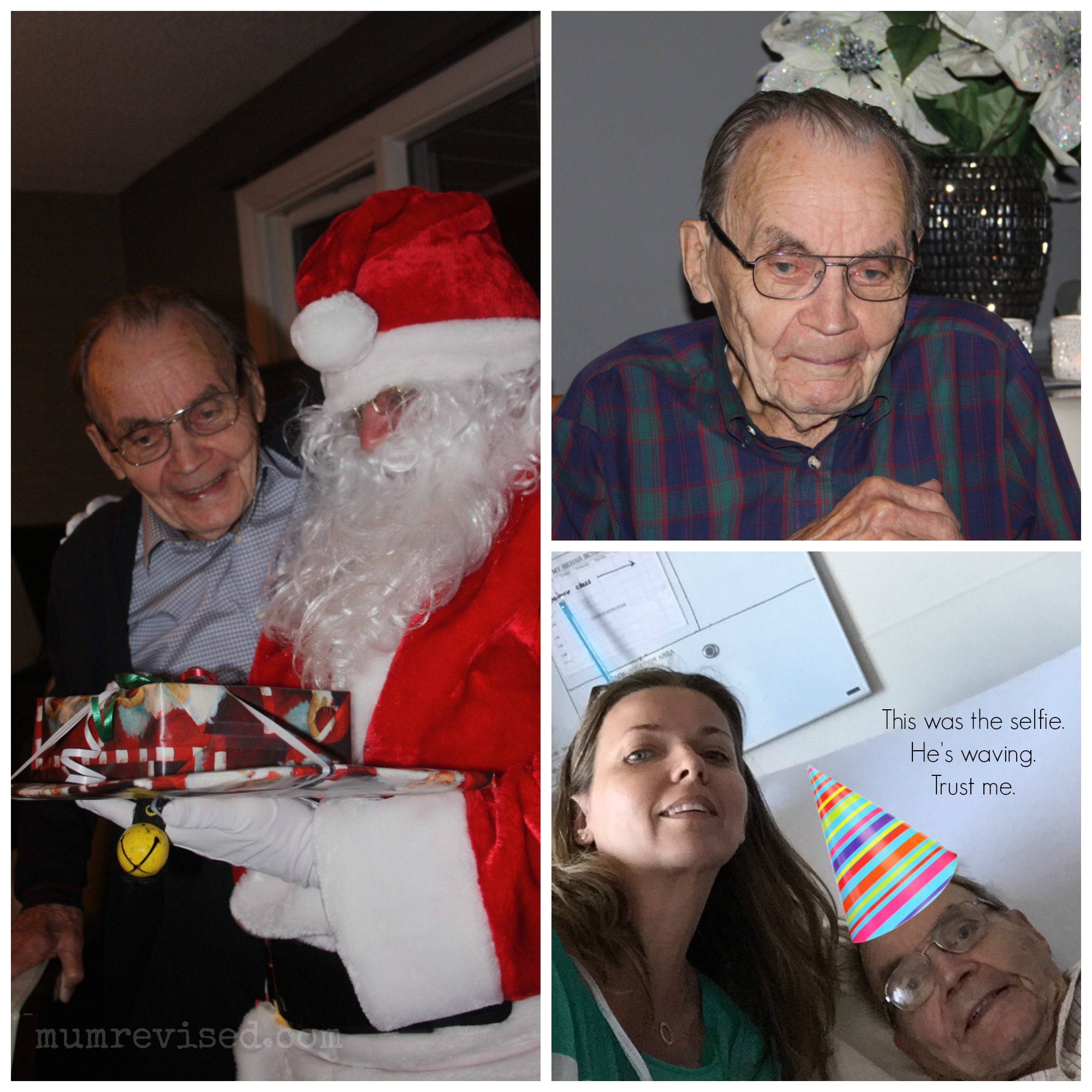 My grandfather is turning 99 this week. For those of you not good at math, that means he will be 100 next year.

I was raised by my single father. Grandpa and Grandma were the go-to babysitters when my dad needed a break. Which, given my disposition, was probably a lot.

My grandmother died in 1995 the day after their 55th wedding anniversary. I was very fortunate to not be working at the time of her death and was able to visit her often as she convalesced at home. I gave my grandfather a break each day from sitting by her side and willing the pain away. Hers and his. I am very grateful for that time I had with her. I was planning my wedding and she was able to help with the guest list. We were also planning a move to Australia and she pursed her lips and seemed unsure of our decision to leave. I also knew that that expression meant she was proud.

Each day she would say something funny. And I knew, despite the hospital bed in the living room, that she was still my grandma. (You have no idea how much I am crying right now. I am totally relying on my touch typing skills. So excuse the typos–which there are likely none of. I am that good.)

I took a breather and I’m back.

Now I get to the man of the hour. Grandpa. Seriously, you would love him y’all. On his 90th birthday, we had a party which I flew in for. After the formal event, we went back to my aunt’s house for dinner and cocktails. My grandfather’s cocktail of choice is Wiser’s whiskey and tonic. It used to be club soda until he talked to his doctor (as the story goes). You see, grandpa suffered from nighttime leg cramps (as do I) and the doctor said, “Eric, what do you drink?” To which grandpa replied, “. Rye and Soda.” The doctor helpfully said, “I prescribe you a switch to tonic and your cramps will go away.” He did and they did. Now his happy hour is ‘medicinal’. I even made him a clock once that had the words “happy hour” printed at each number location to be sure he took his medicine.

Back to the party. Grandpa had imbibed and he started putting on his show. He first did the full lotus position and proceeded to walk across the room on his knees. Then he did headstands. Finally, and this was my favourite, he sat on his shins and put his shoes on his knees pretending to be (and this is not PC) a dwarf (he probably thought he was being PC). The entire time my aunt was screaming, “Stop it, dad. You are going to break a hip.” He didn’t.

Here are ten more things I know you would love about my grandpa.

I really have 99 stories of my grandpa. He has been a huge influence in my life. He embodies hard work; giving back; the importance of family. He believes in loyalty and generosity. Damn, there go the tears again.

Happy birthday, Grandpa! And, welcome to your 100th year.

I would like us to all celebrate the elders in our families. Tell me a story of someone close to you.