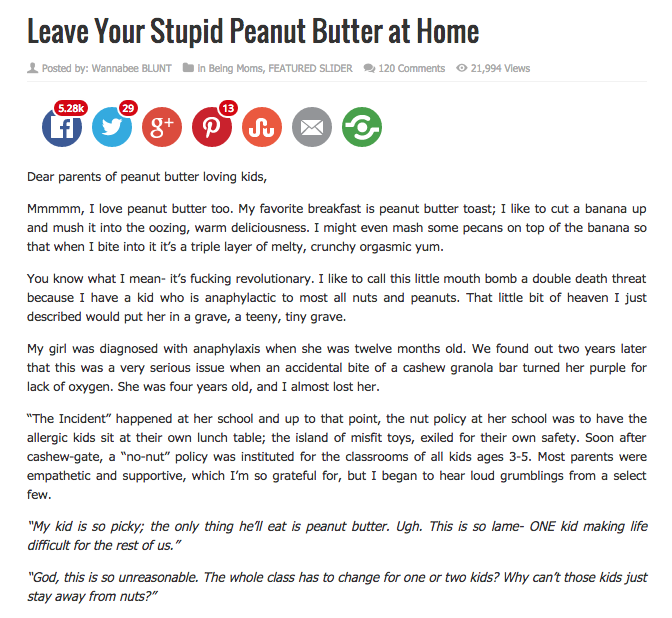 Peanut butter is a killer. Kids can die. Unlike other allergies (egg, ibuprofen), peanut butter can kill if it is just smeared on toast in the vicinity of someone with an airborne anaphylaxis to peanut butter. It doesn’t belong in schools. I’ve said it. I mean it. I take it seriously.

I am furious at the debate taking place on BLUNTMoms started by a mother who is mad at some other mothers at her school who object to the no peanut butter lunch rule in her school for 3-5 year-olds. Jill Pond, the author, shared this:

I’ve held my child down with my entire body while stabbing her with an EpiPen as she turns 50 shades of purple. I have physically heard my child’s airway closing, her breath squeaking like a mouse. I have seen my daughter stare death in the eye.

How can any mother not understand this woman’s fear? Her child almost died going to school (this was after a granola bar sharing incident). Is that not enough?

Here are some of the choice comments. BTW these people are taking registrations now for sensitivity training but act soon!

So this woman is a real peach…

This woman is pro segregated fountains I am sure and is also starting a grammar course.

It really sucks that kids have allergies. It is scary. Whatever happened to parenting by community? Whatever happened to ‘Do Unto Others’? What ever happened to Karma ‘cuz I think she’s got a few jobs to do – not, to be clear, on the children of these ignorant people, but on Jamie and lydia. Is it bad to ask Karma to make them walk one day in the shoes of the people they are complaining about? Is it bad to ask that they understand for a modicum of a second the fear that allergy parents feel when leaving their progeny in the care of someone else?

There is a law in Ontario called Sabrina’s Law. Sabrina was a high school student who was allergic to many things. She navigated the world for years without serious reprocussions. One day she begged her mom to feel normal and get fries from the school cafeteria for lunch like all the other kids did. They ran through the list of questions to ask and off she went. Lunchtime came and she asked about the type of oil, what was fried in it, and all the other questions they had reviewed before leaving the safety of her home. She failed to ask if the tongs used for poutine were the same ones used for fries. Sabrina died in that school with her EpiPen locked in her locker from a dairy protein cross-contamination.

As a result, there was a law founded establishing that schools need an anaphylaxis policy. Most Ontario schools have adopted a no peanut/tree nut policy in the junior and middle schools. EpiPens and allergy allert information are not locked in lockers but kept on the person and in public areas for teacher access. I can’t tell you if this law has saved anyone, but I can tell you that the kids of Ontario, eat meat or cheese sandwiches, leftovers, soup, fruit and veggies and never go hungry and never complain. The kids started with this policy and the parents stick to it. We all understand. I know that my friends who have kids with allergies feel safer knowing that there are people in the building who know how to use an EpiPen, they understand the severity of the concern and comply with the policy. Do we not all have the right to feel safe sending our cherubs to school?

These lovely comments are a clear sign that more needs to be done in educating others. Allergies are not going away. The risk to lives is not going away. Assholes who think they have the right to put others at risk are not going away either. These people smoke around babies, leave their snot rags on communal tables, don’t slow down at crosswalks, don’t lock up their guns, don’t immunize their children, use racial slurs and bigotry liberally and send their kids to school with peanut butter. I have a year’s worth of rants for these people but they aren’t going away.

I wish there were no allergies. I wish I had an answer. I wish that Sabrina’s law was everywhere. I wish that tolerance and patience were everywhere. I wish that these people who want to segregate these babies because of something they have no control over, find a special place in their current life or their afterlife that they are segregated from their family and friends. That they live their afterlife knowing that their idiotic beliefs of ‘look after numero uno’ instead of ‘love thy neighbour’ will be their curse. I wish them a long afterlife with numero uno at a special peanut butter laden table in hell.