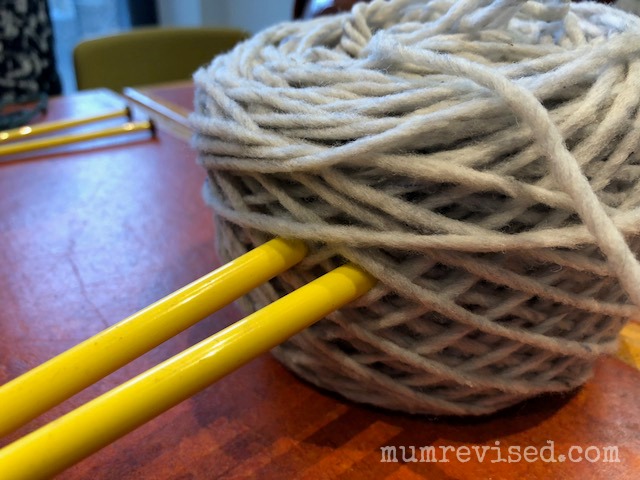 I feel really cool. First, I used the word ‘lit’ to describe knitting and it not only rhymes, but it is a cool-kid word, word (also a cool kid word). Second, because I need to use my new knitted cowl more, I’m telling myself it is a bit cool, therefore, I am cool and need to warm up.

My daughter joined a knitting club at school and, even though knitting was not on my list originally (you will find out why soon), I added it because it looked like fun and you can do it and not hurt yourself. Also, you can knit while you are watching more Netflix. You don’t feel as guilty watching Netflix because you are really just knitting which is making clothes which is way better than just sitting and eating while watching a show which is what I used to do.

Full disclosure, I tried knitting once. Someone started it for me and handed it over, but I tried to knit Mister a sweater (before he was Mister and he was still pre-Mister). It was to be a surprise for Christmas. Surprise because I learned to knit, and surprise because I knit him a sweater that he would feel compelled to wear and feel totally awkward in but be proving his love by going out in public in it. Luckily he was saved.

I mentioned one day, “You will never guess what I’m getting you for Christmas.” Now, a normal person who doesn’t want to ruin Christmas even if they see the elephant with a giant bow and gift tag they are getting for Christmas right behind you would say, “A giraffe?” But pre-Mister didn’t know this rule and guessed (don’t ask me how), “You are knitting me a sweater.” Fuck. I didn’t knit a stitch more. I even sold all my knitting supplies and the partly done sweater in a yard sale years later. I relayed this story to Daphne recently and she was gobsmacked that Mister had guessed anything at all. “You are so wrong, Dad,” she was muttering as he was trying to–still!–defend his stance on the issue. One day he’ll learn.

That was 25 years ago and I am still angry about it. I don’t think I would even knit Mister a sweater, even if he begs me, and he is already begging for a hat. At least he is starting small. I won’t rule it out entirely because I could get Alzheimer’s and the world could start spinning backwards causing a space/time continuum so I am back to a time before I had that grudge. But the goal of learning to knit, I mean start to finish a project, was to do just that. Finish a project. I had no idea how much I would love it! I don’t remember loving it 25 years ago (but that might be the grudge talking), so maybe the gift of a Christmas sweater was really the gift he got me. He saved me from having to complete it when I was clearly not going to make the Christmas deadline without pulling all-nighters. Bonus, Mister also saved me from having to stifle a laugh with him in that ridiculous sweater before realizing I never wanted him to wear it again in public.

I’m not going to lie, I’m pretty impressed with my final product/s. So much so that I started printing off patterns for more knitting projects. Converted!

If you liked this, subscribe here on the annoying pop-up or on my YouTube channel to find out what I am up to next.