This Men’s Room is Safe to Enter 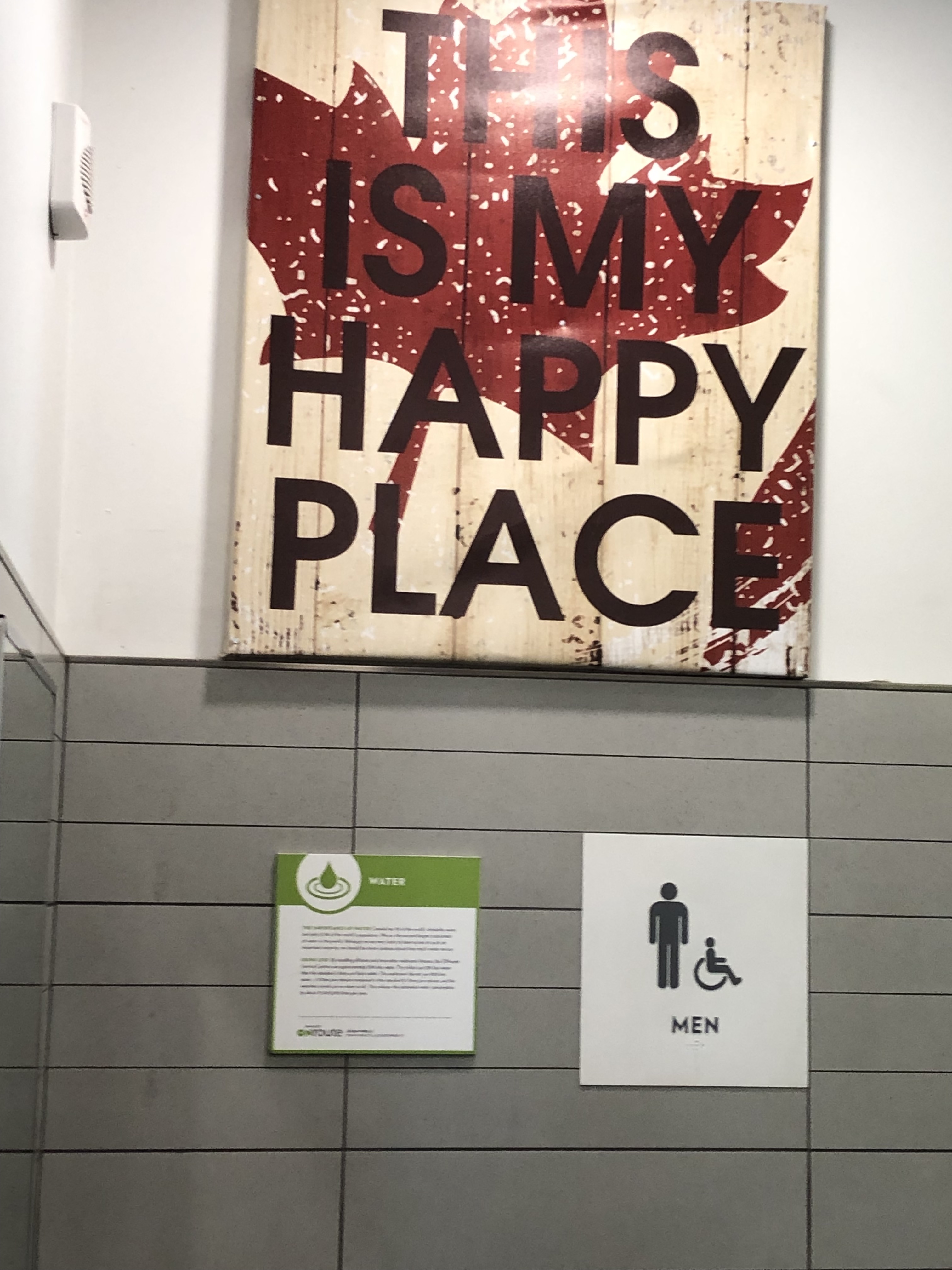 I have, on purpose, used men’s rooms when needed. I will cover my eyes and say, ‘not looking, not looking’ as I head directly to the stalls. Yes, they are as disgusting as men warn you. Not as disgusting as the women’s stalls at the Beijing Zoo though, so all-in-all, acceptable for use if you have strong quads and can hold your breath for more than two minutes and are not afraid of an audience.

I recently came off a flight from Thunder Bay to Toronto and had enjoyed a giant coffee on the plane. It was a jet and probably had a decent onboard facility, but still, I waited far too long to find an actual receptacle for my gift to the water treatment plant. I needed something PDQ once we landed. And since there is no texting shortcut for that one, I’ll spell it out. Pee Damn Quickly.

I power walked past several with lines knowing there was one at the baggage carousel area to the left after the escalator (this was not my first PDQ). I continued my power walk with a single-minded focus: Do not uncross your legs until you are within the target range of the bowl. Because I was so focused on the stall, I did not notice the sign, nor the man washing his hands (to his credit, he didn’t notice me either), until I had my hand on the stall door and realized it was odd to find urinals in the ladies room. Compute, Kristine, compute.

Urinals? Could it be that all washrooms at Pearson International are gender neutral? That’s progressive. But, doesn’t that make performance anxiety real if there are all genders in one facility without partitions around the urinals?… Oh, shit. There was a man at the sink when I came in. Could I be in the men’s room?

The hand washer was gone and I retreated without relieving myself to review the signage. I was definitely in the men’s room. I was still crossing my legs and now laughing uncontrollably, which is not a great combination. At this exact moment, the gentleman who had sat across from me on the flight who I’d struck up a conversation with about Persians in Thunder Bay

(A Persian is a cinnamon swirl baked thingy with pink icing) happened to also need the facility. His response to seeing me exit the men’s room was, “How was the view in there?” To which I replied, “I was pleasantly surprised to see a man washing his hands. This facility officially passes. It is safe to enter.” No, I didn’t actually say that. That was the comeback that occurred to me at 4am the next morning. I said, “You might want to use another facility, I found women in this one?” I didn’t say that either. That one I just made up. What I actually said was, “Bwahaha blubber blubber.” I know. Inspiring.

Later beside the carousel, he approached me again. This time I’d had some time to think. “That Persian must have affected your eyesight,” he continued to laugh with me. “I identify as a Thunder Bayer and we are more progressive than most.” Maybe it was the pink icing talking, but I was happy to close with that.

Can we just acknowledge how funny this image is? Really… the Men’s Room is your happy place? I came across this sign yesterday at a highway stop and it reminded me to tell you my story. As I was taking this picture, a man turned the corner into the ladies room and had to turn back. I almost peed myself.