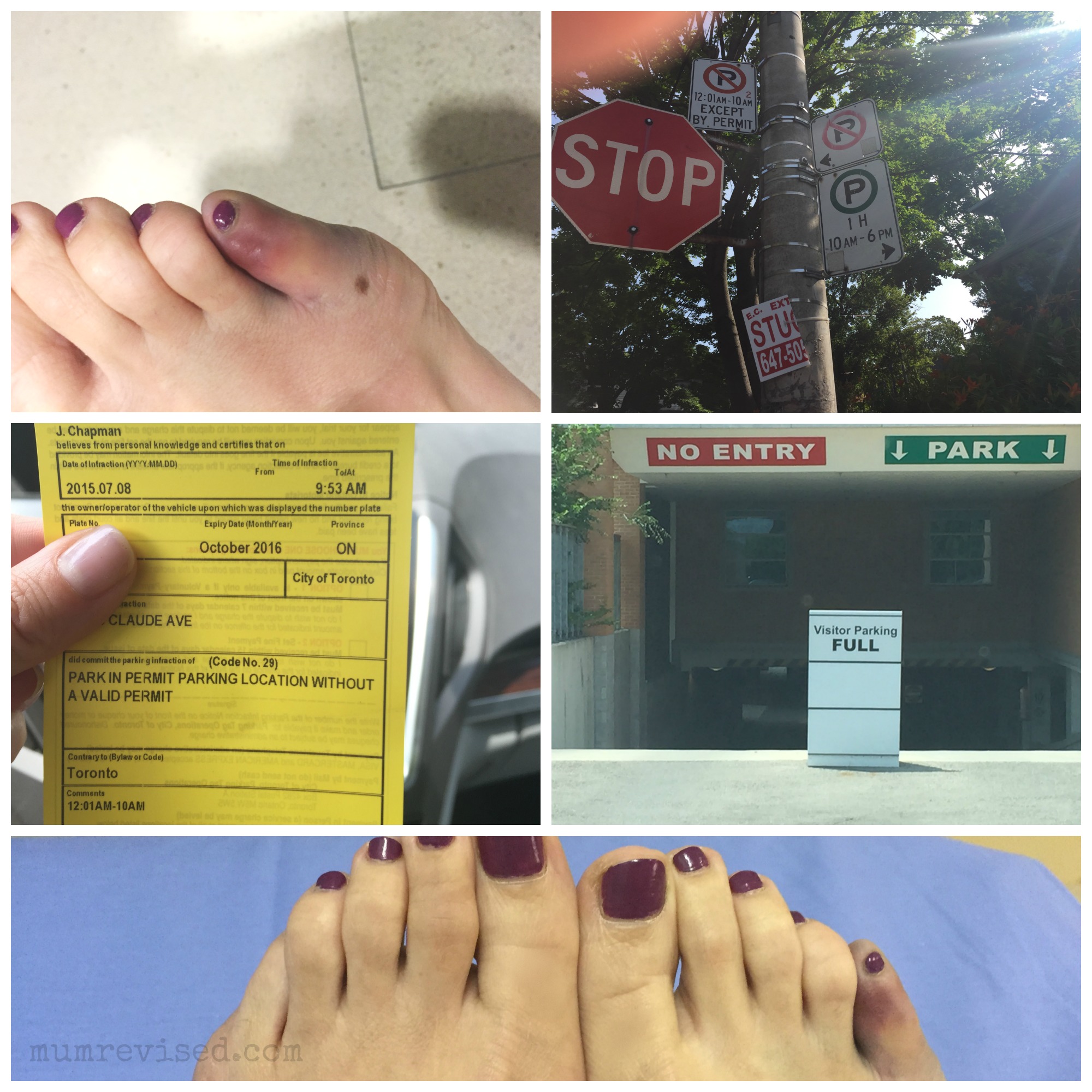 It has been, literally, 3 months since I last broke a bone. So I was really overdue.

I approached the nearby hospital to have an X-ray on my broken toe from March. Lucky for me though, I had smashed the shit out of a toe on the other foot just the previous day. I was trying to look nice by steaming my shirt. I plugged in, made a coffee, came down to have a go at the shirt and just as I was about to turn on the light my feet slipped on the marble floor and I, thankfully, stopped my fall by cleverly whacking my foot on the underside of the counter kick plate. Cue break.

Seems the steamer had the on button depressed and I was steaming up the whole room while I was injecting caffeine. It sufficiently soaked the laundry room floor to a slippery disaster zone worthy of a roadside flag turner by the time I unwittingly entered the slip and slide without my goggles on. I digress.

Believe it or not, the broken toe is not my gripe. My Friday F-Off goes to the “Officer” who presented me with a fine yellow piece of paper upon my return from finding out that I had, in fact, busted another toe.

The hospital had been renovated. In that renovation, they added a parking garage because the neighbourhood parking is by permit only from 12.01am to 10am and people were inconveniently getting sick outside those hours. This is all super handy for those of us wanting to get the hospital trip over with in the morning. Problem is, the garage is ALWAYS full. I circled and circled until I found a street parking spot, said a Hail Mary and hobbled to the fracture clinic.

When I arrived at 9:22am, I took number #68. They were currently serving #35. I waited patiently because it is a patient waiting room. Duh. They called my number a mere 90 minutes after arrival to check in. Not to see the doctor. To check in.

I approached the counter.

Me: I have an unusual question for you.

Especially cheerful counter lady considering the amount of work they were making her do: Shoot.

Me: I am here for an X-ray on my left foot for a broken toe but I think I broke a toe on my right foot yesterday by happy coincidence.

Cheerful Lady: You did what?

Me: I think I broke another toe. My question is this: Should I proceed to emergency and have an ER doctor issue an order for an X-ray on my right foot or see the Orthopeadic surgeon here first for him to place the order, or can my doctor here just add my other foot to the existing order and see me at my appointed (ha!) time?

Cheerful Lady: (Laughing while she made the WTF?! face) That IS a new one.

Me: Really? I am surprised this hasn’t happened before. (Insert really goofy exaggerated smile emoji here)

Cheerful Lady asked the doctor and I could hear him say ‘She did WHAT exactly?’. He ordered the X-ray without looking at me, I waited a mere 4 hours for him to tell me X-ray one was fine, X-ray two was not. No cast this time, just tape it and stop hurting myself. Easier said…

So I hobble out to the car that was clearly parked in a spot that was, not only 1 kilometre (which is approximately 42 pounds – metric conversion) away, but in a legal spot at this point in the day. I opened the car to thank my lucky stars for small miracles that I would be home before dark and discovered my plasticized yellow fuck you on the windscreen.

“Officer J Chapman” had come around only 7 minutes prior to the parking restriction being lifted. My guess is that “Officer Chapman” was sleeping while I was cursing and circling to find a spot to go to the hospital. Maybe I should have screamed that – TO GO TO THE HOSPITAL. WTF?! I also noticed that I only had one yellow fuck you. According to the sign, I was 3 hours too long in my prescribed spot. I think “Officer Chapman” went back to sleep after he/she issued the “Infraction Notice”. Guess what my infraction notice would say?

Maybe the fine is a little high, but you have to make a statement otherwise the “Officer” might keep doing the dickholery. Tough love.

And for shits and giggles I thought you might play a game of what came first in the collage below. It might be fun so play along will you? Beware, there is a trick 🙂

(The order these photos were taken was from left to right 2, 1, 4, 5 and 3. If you got it right then you are super smart! That’s your prize. You get to be super smart.)

And for a bit of fun, check out this kid. Seems we all feel the same way about those tickets.