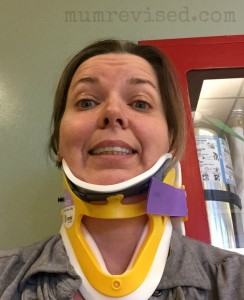 It’s been a bad year. A really bad year for our family. We are grateful we are all alive and healthy, despite our attempts to the contrary.

This is the (hopefully) last edition of my Emergency Room Wisdom series which goes something like this:

I am NOT going to the Emergency department for blog material. There is, however, a plethora of material in there. I like to call the emergency department home away from home this year. In my attempt to make humour out of a crappy situation I learned the following new emergency room wisdom:

That is it. I am on the mend, the toilet is still not flushed in emergency but it is at my friend’s house and I have been shopping for a new car. I am terribly lucky to not only survive but to survive with just a whole lot of sore muscles and a mild (during the day, major during the dinner hour) concussion. I never finished my gratitude list because it became an attitude list, so let me be thankful that I can still hang with you guys. You have made this year more than tolerable, you have made it make sense. Keep the comments coming, they are my fuel. Thanks!